Molly Rose – A Woman in a Man’s World 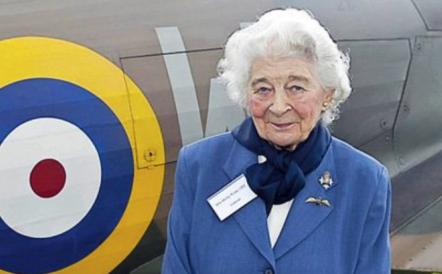 This month saw a special lunchtime meeting, with the wonderful Molly Rose giving a fascinating talk to our members in ‘Dancing with Spitfires’, at Marsh Farm Hotel, Royal Wootton Bassett. Molly, now aged 95, is a veteran of the WW2 Air Transport Auxiliary.

An Early Start
I was born in 1920 into a family, the seventh of eight children. There’s something special about the seventh in the family – they always get special treatment. The eldest was my brother. He was seventeen years older than me, so anything that he did was pretty special, as you can imagine. Even more so because the next down were six sisters, and I was the fifth of the six, so this brother of seventeen years older, anything he did I thought was tremendously special, and I think he was, actually.

When he came down from university, he learnt to fly. The first aircraft that came into our lives was a Tiger Moth, which was tethered in the field behind our home, just outside Cambridge. On occasions, if he was going somewhere that he didn’t mind taking a small sister of eight or nine, he would say, ‘Do you want to jump in?’ and of course I hadn’t got suitable clothing on, but you didn’t rush in for a cardigan if the brother was already getting into the aircraft; you’d better climb in quickly, or you’d get left behind. And so I had some very cold flights in the Tiger Moth as a little girl, but it didn’t put me off flying.

Fledgling Wings
When I was sixteen, my father said, ‘Do you want to learn to fly?’ So I said, ‘Yes, of course,’ and he arranged for me to have lessons. I was learning to fly when I went off to school in Paris for a year. When I came home in the holidays, I got my flying licence, only a matter of three months after I’d got my driving licence. But you don’t amass a lot of hours flying; you take far longer getting into the thing and getting out of it than you do actually flying it!

When I came back from school, there was the question of work. I had thought that I would house-keep for my father and have a lovely time in Cambridge. But he was really a very wise man. My mother had died when I was just ten, and my youngest sister was only three, so he was left with all these children. He was very much in charge of us all and in those days if a parent had ideas about things, you fell in with it pretty quickly. Anyway, he obviously didn’t reckon on my ability as a housekeeper. In fact, he got a very efficient housekeeper, whom I promptly and intensely disliked.

So he said, ‘If you want to go on flying, Molly, would it be a good idea to know how planes work?’ I thought about it overnight and decided that actually it would be a very good way of getting out of the house with this housekeeper that I didn’t like. I came down the following morning and said, ‘I think that’s a very good idea.’ He replied, very promptly, ‘Well, I’ve got the overalls, you’ll go in at 8 o’clock next Monday.’ And so up to the aerodrome I went at 8 o’clock the following Monday, the only woman working on the hanger floor.

The chaps were extraordinarily good to me. If there was a screw that I couldn’t budge, there was always someone around that would give it a whack and hand the screwdriver back again. I appreciated this enormously, but equally, thank God, I’ve always had a sense of humour. There was one moment when I was re-wiring a Tiger Moth and I was bent double into the cockpit, and I had a great wallop on the behind, so I climbed out of the aircraft and looked around. Nobody could be seen anywhere, so I just laughed and got on with it. I think if I’d been tiresome about it, they probably wouldn’t have wanted me to help me at all.

Time went on. I was married when I was just nineteen, and for six months before my husband went into the army, we were in Oxford. Then he was called up and I went back to Cambridge and got on with my engineering. It was the beginning of ’42. My father had died when my husband was on embarkation leave, and so my life had really fallen apart to a very great degree. I found amongst the letters of condolence a letter from ATA asking whether I would be interested in joining them. I grasped this as a wonderful opportunity to do something that was going to be interesting and so I agreed. Within three weeks I was at Luton, ferrying aircraft.

High Flyers
At the beginning of the war we were totally unequipped for what came and there were people who knew that we were absolutely in no position to wage war on anybody. When it all happened, there was a chap called d’Erlanger, who was a director of BOAC. He realised that we were going to run straight into problems and wrote to the Air Minister, saying that he thought the weekend flyers could be useful. There were a lot of flying clubs around at that time, and people were beginning to get interested in it. D’Erlanger thought that they could be used by the Air Ministry to ferry important people about or carry spares. It wasn’t until August, before war was declared in September, that they finally said to d’Erlanger, ‘Recruit your first 40 chaps.’

“I grasped this as a wonderful opportunity to do something that was going to be interesting and so I agreed.”  Tweet This!

And so the first 40 were taken on board. There was a woman called Pauline Gower, who was the daughter of an MP and she knew d’Erlanger very well. She had done a lot of flying and she pinned him down one day and said, ‘Look, why don’t you have women in this?’ and he agreed. So she then said to her father, ‘I think this ought to go ahead. There are quite a lot of women who’ve done a good deal of flying and they can perfectly well do this.’

The Air Force, of course, weren’t so welcoming! The idea that they were going to have women flying their aircraft didn’t please them at all. But Pauline recruited the first lot. One was a grandmother, there were several who were late on in their lives but had done quite a lot of flying and there was one girl of nineteen. She was quite the youngest of the lot, only 5’ 3” and tried to pretend that she was much taller than she was. The age variation was terrific.

They were recruited in January 1940, ferrying single-seater aircraft in the bitter cold. But of course, being women, they decided, this was a job they were doing and so they jolly well got on with it. Pauline was able to recruit more as time went on, but it was d’Erlanger who got them in, flying all sorts of aircraft, although the women were confined to
very light, single-seater fighters, and not even those to begin with.

It was early in 1942 that one of the number was given a Hurricane to fly and she, having managed it perfectly well, gave a thumbs-up when she came down and hence all the girls were allowed to fly single-seater fighters. People are always amazed that we flew so many different types of aircraft with such little training. But I’m sure most of you are car drivers, and provided you know what makes a machine work, you’re away.

The Sky’s The Limit
The first Hurricane I ever had, I was very excited about, of course, and so I took off and once you were up, you were absolutely in charge because there were no flight lanes and designated heights in those days. Once you were up, the sky was the limit, and so you really could do what you liked.

Then of course the realisation came that you had had to land the damned thing, and that’s a different story. Because you really needed this little book, one that we used to take with us everywhere. You got the aircraft that you were flying and put that page in the top of your flying boot and it told you what speed to come in to land, because that
did vary a bit. Thankfully, it all worked and I did a reasonable landing, and so then I was ferrying all the single-seater fighters.

By the time I joined ATA in ’42, they had a very good system of training, reckoning that they kept your interest much more if you did a variety of things. So when you had done a certain amount of ferrying of the single-seaters, you went back into school and had a session on an Oxford, and that opened up the Oxford and Anson and that group of twin- engines. And when you had ferried those for a while, you then had a session on a Hudson, which was a heavy twin-engine aircraft, the only aircraft that I flew where you had to have an engineer with you, because the pilot couldn’t reach the landing gear from the cockpit. All very important stuff!

You were then designated to a ferry pool. I was designated to Hamble, where they had one of the three women ferry pools in ATA. It was an interesting pool. There were about 30 pilots and about eleven or twelve different nationalities. We had one from Chile, and another girl from the Argentine and the Chilean one didn’t speak English when she arrived, but was a very experienced instructor. She started ferrying, but on about the third or fourth day she had a forced landing near Hendon, and when the police arrived they couldn’t understand how this woman who couldn’t speak any English was ferrying a British aircraft, so she was taken to the police station. It took 24 hours for ATA to get

in touch with her and haul her back to Hamble. So they decided she’d better learn some English and put her to work in the hanger. She certainly learned some English there! All sorts of words I had never heard! But if ever I end up saying, ‘Oh, bloody hell,’ I know it’s straight from chile!

A Safe Landing
My son once asked his godmother how many aircraft she’d flown, and she, having been one of the four engine pilots in ATA, replied, ‘Oh, 85.’ He then said, ‘Mother only flew 38. Why did she fly so few?’ and Philippa said, ‘Oh, she was just lazy!’ And I promptly said, ‘You were in the whole thing far longer than me, dear!’ But when anyone says ‘Did you enjoy it?’ you couldn’t enjoy things in those days, because we were at the age when all our contemporaries were fighting in one way or another and whatever you felt about it, there was always that terrible sadness of losing so many of your friends. We were both incredibly lucky.

Read more articles like this in Women’s Business News

Hi my name is Nikita! I am 21 years old and am currently studying for an English Literature degree, at the University of Gloucestershire. I enjoy reading, baking and playing the piano! I came to the Women's Business Club as an intern and my current role at the is PR Assistant where I pretty much support wherever I can.

Overcoming the odds – thriving as a photographer in a global pandemic!